This post reviews the Pareto Principle – definition, examples, strategic implications, and application to project management. Then it probes how the principle may be at play in the immediate moves by Elon Musk after his takeover of Twitter.

The Pareto Principle, or 80:20 rule, is a rather simple but profound concept. It says, generically, that roughly 80% of the outputs will result from 20% of the inputs.

Or…that 80% of your results will come from roughly 20% of your efforts.

Going a little deeper, of the 20% of inputs that yield 80% of the outputs, the Pareto principle also applies! And of that top 20%, 20% of them will generate roughly 80% of the those outputs.

This is an astounding revelation for prioritizing. The reality is that all inputs do not yield equal outputs. As a rule – by observation – inputs and outputs are very disproportionate!

One application of 80:20 thinking is project portfolio management (PPM). PPM is all about prioritization. Hence, PPM’s want to prioritize those roughly 20% of the projects, or project spend, that yield 80% of the results.

Since Twitter is so prominent in the business news right now, I thought I would focus on that.

From a project management perspective, Twitter is not being well-managed. It would seem that:

So what are the drivers behind all of these major moves within such a short period of time? Is the Pareto Principle somehow at work here?

My guess is that the Pareto Principle is core to this storm of decisions by Elon Musk.

For example, if you can believe that 20% of the workers produce 80% of the results, then maybe these moves make sense.

However, if you believe that 80% of the human resources output results from 20% of the policies toward people (ie. how people are treated), things will likely not end well. But, playing devil’s advocate, consider these things:

The strategy at Twitter has been, in a word, disruptive. It is a major pivot.

We will see what happens in the coming period. We’ll find out if these moves were, in fact, effective. But there is even controversy over how to measure the success!

Others give Musk credit, based on past performance, for having a vision. Does he actually have a clear picture of how he wants Twitter to be, and all of these moves are like a ‘big bang’ to rapidly reshape it to that picture?

Instead, it is more like the tough medicine of a turnaround strategy. Or it may be business model innovation.

I mentioned above that I wonder if one of the main strategic drivers is 80:20 – that Musk wants to keep only the 20% of employees who are hyper dedicated, extremely capable, and 100% committed to his program.

There may be other 80:20 moves afoot, as well. This could include eliminating 80% of other costs which are evaluated to produce only 20% of the results. Maybe 80% of the rules for engagement will be eliminated, but the 20% most effective will be strengthened. 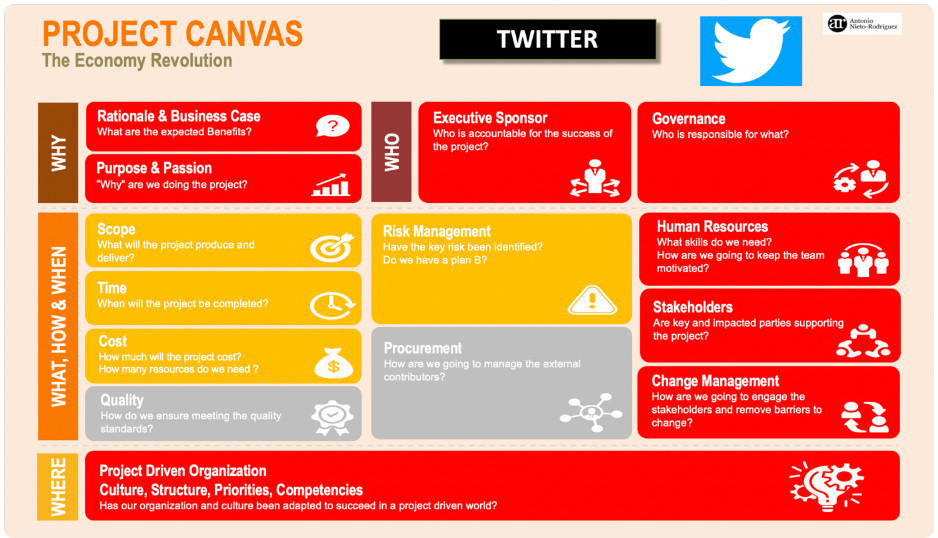 The project canvas above shows the 14 key and comprehensive considerations for a project. How does the current post-acquisition implementation at Twitter stack up against the project canvas?

Click on the canvas to view Antonio Nieto-Rodriguez’s LinkedIn post, “Is Musk’s Acquisition of Twitter a Project Doomed to Fail?” He frames the issue nicely – and you can view the reactions among numerous project management practitioners.

Once comment, by Kavita Sharma, especially caught my attention. She said,

“That’s why PMs can never be visionary. If a canvas is followed, then you are not looking beyond certain horizon. See all leaders w by beyond that – take an example for Steve Jobs.”

The answers to these questions will come out over time, as the Twitter situation evolves. Let’s see what happens!

While time will tell, what do you think about the 80:20 principle and Elon Musk’s acquisition of Twitter?

The following is an interesting video on the Pareto Principle, with some out-of the box’ examples: