Leadership is about identifying the key problems and opportunities in a situation, and marshaling the resources to accomplish the objectives. It can be helpful to learn how others before us have handled leadership challenges.

This is what Tipping Point Leadership provides – a framework for leading based on successful experiences in the most challenging situations.

This post looks at the concept of Tipping Point Leadership, a framework for overcoming hurdles, and applications to strategy and project management.

What Is Tipping Point Leadership – the Concept

Tipping Point Leadership is much about finding and pulling the levers that matter the most. It borrows from the Pareto Principle, or 80:20 rule. There are many ways to express that:

The principle can be expressed in an infinite number of ways. And there are many derivatives, such as 90:10, or applying 80:20 thinking again to the 20% that matters.

Applying the 80:20 rule, Tipping Point Leadership provides a framework for executing strategy rapidly and at low cost. As shown in the figure above, it does this by helping to identify the disproportionate influence factors that allow leaders to get results quickly and inexpensively.

The phrase was coined in a “Tipping Point Leadership” article in the Harvard Business Review in 2003 by W. Chan Kim and Renee Mauborgne, the creators of Blue Ocean Strategy and Blue Ocean Leadership. In that article, Kim and Mauborgne cited and analyzed the leadership success factors in the story of William Bratton, former police commissioner of New York City. Bratton had turned around the huge department that was loaded with problems such as:

Bratton successfully turned around that situation in less than two years. The analysis of his success led to the Tipping Point Leadership framework for overcoming the formidable obstacles, as Bratton did.

Let’s take a look at the four key organization hurdles that provide the foundation for Tipping Point Leadership.

Kim and Mauborgne identified four hurdles that leaders in challenging situations need to overcome. The chart above provides a visual.

The following sections provide details about each of the four hurdles. 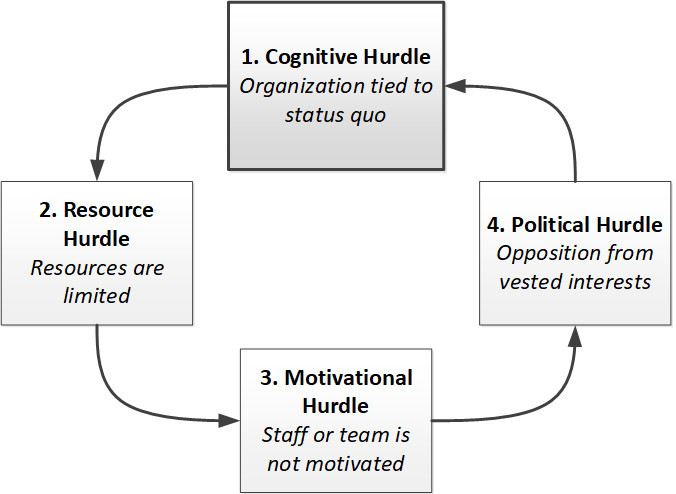 The first hurdle of Tipping Point Leadership, the Cognitive Hurdle, is characterized by a culture that is tied to the status quo – and thus resistant to change.

Typically this situation is characterized by a denial that problems exist in the first place. This is indicated by statements like, “Things are going fine the way they are”, or “Let’s not rock the boat”, or “If it’s not broke, don’t fix it”.

The key approach for getting over this Cognitive Hurdle is to directly expose people to the problems firsthand. But it is not a matter of just exposing anybody – it is most important to use 80:20 thinking and focus on exposing those who might have the most influence on others, and the most influence on changing the situation.

Another approach to the Cognitive Hurdle is to think of team members as customers – and use design thinking. This approach can help you to go deeper to the core – the root cause – of people’s beliefs and actions.

All of these approaches put people face to face with the problems – exactly where they need to be. The motivation tipping point will be when you begin to get buy in on just what the problems are. When there is enough critical mass, everyone can then focus on becoming part of the solution.

The key is that you are not force-feeding bad performance numbers to people, but rather are standing shoulder to shoulder with them in facing the real problems. It is a process of discovery and acceptance that you are traveling together. 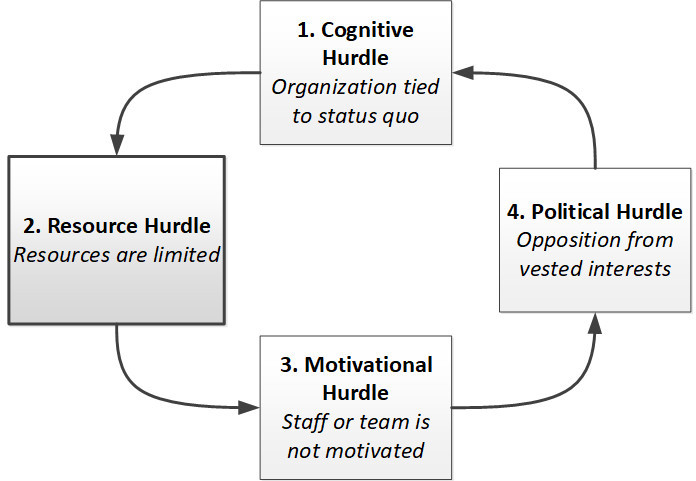 The key is to identify the high impact areas – the areas that would most be influenced by a change in resources. Focus resources there to get the most impact.

In analyzing the resources that you do have, you may identify that you have plenty to address the few high impact areas. Sometimes you may even have an excess of some resources, when viewed from an 80:20 perspective. You might consider trading some of those excess resources – as Bill Bratton did in NYC – for some that you really need for the high impact areas.

Warning: Resource Hurdles can be a trap. They can distract a leadership team by focusing on efforts to scope down the goals, fight for more resources, or both. Trimming goals itself can be demotivating to everyone. Fighting for the resources can distract from the real core issues – and in effect waste valuable resources and not even solve the problem. 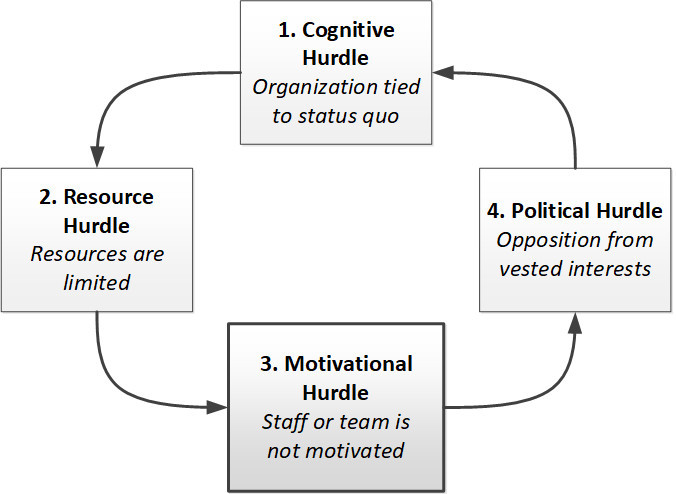 How can you identify motivational hurdles? The best way is by going straight to the source and asking people about their jobs, probing their attitudes, seeking to understand what motivates – and demotivates – them.

One way to do that is to identify the ‘leaders in the midst’ – those that themselves will have the most insight not only into themselves, but into others in the greater community of workers. People naturally want to succeed.

Therefore, probe for the barriers – that are holding them back. And approach those discussions with an open mind – to awaken both yourself and those with whom you are engaging.

The Motivational Hurdle needs to be addressed much deeper than just finding some typical incentives that might motivate people to perform. Clarifying responsibilities and accountabilities, combined with creating a culture of performance, is what gets the team over the hurdle.

Finally, it is about breaking down the problems into small enough chunks that people believe can be tackled. Once there are a few successes, you will be on your way to a motivational tipping point. 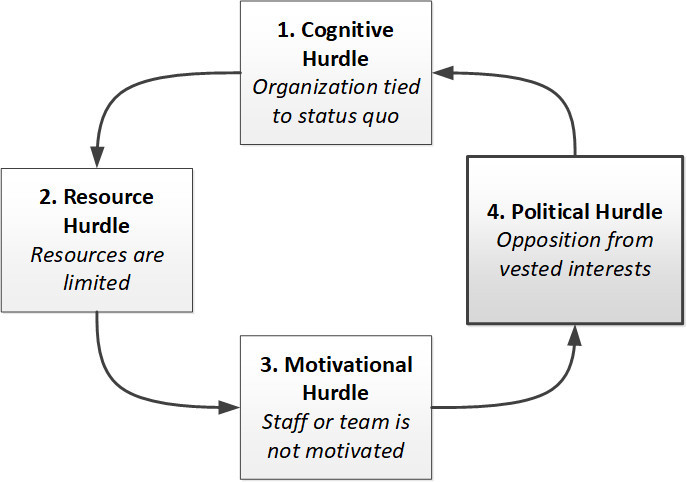 There are clearly territorial and related interests that drive the political hurdle that is an impediment to progress. However, often these things are only allowed to exist because they are kept ‘below the radar’.

If you are able to illuminate these unbalanced, self-interested power centers, you will be part way there to overcoming them.

‘Tipping Point’ means finding a way to turn the momentum.

Illuminating Political Hurdles to the most influential stakeholders around you is a big step toward turning the tide. Taking the ‘high road’ by example also provides a counter force to help turn the tide.

There are two immediate ways to handling political issues. The first is to either add team members or build alliances with influential, widely respected stakeholders that can provide credibility. The second is to anticipate arguments of the resisters, and put strategies in place to counteract them.

The above outlined a framework for approaching problem situations – and turning a team around.

This is similar to what a leader would do when a business turnaround strategy is needed. Sometimes ‘tough medicine’ is needed – and fast.

Tipping Point Leadership, by contrast, is more focused much more on the human element. Indeed, three of the four hurdles – Cognitive, Motivational, and Political – are all about people. And even the fourth, the Resource Hurdle, is partially about people.

Tipping Point Leadership temporarily puts aside the numbers and analysis and focuses up front on engagement with people. The analysis and numbers may become a part of the discussion. The important part is that when they do, they will come into full view by most or all of the people! Leaders are doing it with their people. It is all about the team, shared understanding and vision, and clear responsibilities and accountability.

There are some big lessons in this approach for project managers.