The Satir Model for Change provides a very personalized approach to the stages that we as individuals, teams, and even organizations pass through during times of change.  This post examines what the Satir Change Model is, how it is an important consideration for strategy, and how project managers can leverage it to provide leadership.

What Is the Satir Model for 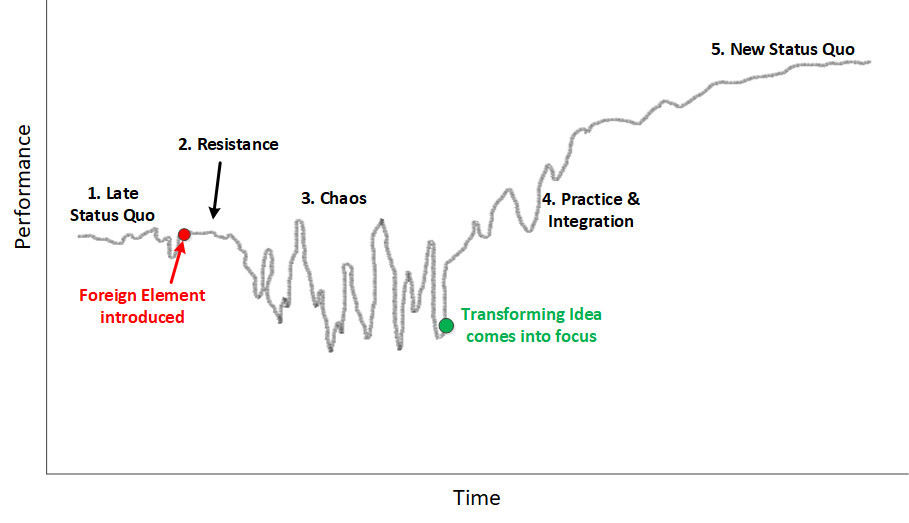 The Satir Change Model – also sometimes called the Satir Growth Model – was developed by Virginia Satir, a family therapist. The model is targeted to help people improve the way they cope with disruptive change. While it certainly applies to family therapy, it has come to be accepted also for people coping with organizational change.

The power of the Satir Change Model is encapsulated in the following short quote from Virginia Satir:

“Life is not what it’s supposed to be. It’s what it is. The way you cope with it is what makes the difference.”

The core of the model is the curve, depicted above, showing the five stages of change:

One of the key challenges is predicting the effect of changes on performance. The curve in the diagram shows that the New Status Quo will be at a higher level of performance and productivity.

But the Satir Model focuses on tracking performance – which does not necessarily guarantee enhanced performance.

Whether it is an individual, or team or even company, there is a well-established way of working. The Status Quo involves doing things the way they have worked – probably for a long time.

In some cases, even though a disruptor – known in the Satir Model as a ‘Foreign Element’ – has not appeared, there may be a lingering sense of change coming, or sometimes even a sense of ‘calm before the storm’.

In other cases, change may not be in the mind of anyone. There may be no sense of a need for a change. Often in this case, people do not have a sense of the big picture – for if they did, they would be clearer on risks, trends, and inevitabilities that could be at work and will eventually bring change.

The toughest, but most rewarding, thing is to recognize the possibility of change before anyone can feel it and before a ‘Foreign Element’ arrives.

The Late Status Quo is over; it ended with the arrival of the Foreign Element, which disrupted the stability that existed.

This Foreign Element can be experienced by everyone, or by select groups of individuals, such as C-suite executives, front-line employees, or sales people.

Since things were going so smoothly, and since everything was so well-aligned in the Late Status Quo stage, there is naturally a Resistance to the change. Often this Resistance is simply a denial that change is needed.

The period of stability may remain for a while…but soon enough, reality sets in – whether accepted or not – and performance declines.

With the decline in performance, the stability that was enjoyed transforms into Chaos. While productivity has declined, a better description is that it is erratic.

Emotions are high in the Chaos phase. It is difficult for anyone to see beyond it. However, the perspective of the Satir Change Model provides some hope that things will improve – that the team can find its way out of the abyss of the Chaos stage.

The oscillating performance during the chaos stage is caused by people grabbing onto bits of the past through resistance, seeing glimpses of hope for a different and better future, and cycling up and down emotionally.

The Chaos stage can be anticipated in any type of change. If the change is one being executed as part of a program, it stands a chance of being less painful if managed right. If it is a forced change based upon some condition changing disruptively, then the best antidote to the pain is the hope of seeing it through the process to the next step.

Ultimately, the appearance of a Transformative Idea is what begins to pull individuals and teams out of the depths of the Chaos stage.

With the Transformative Idea, the team is pulling out of Chaos, but the new and different future is still not secure. It is more of a ‘potential’ solution and takes Practice and Integration to realize increased performance and productivity.

Practice and Integration are necessary to actually put the knowledge, individual capability and systems in place to make the transformative part of the change occur.

Where the Foreign Element created a need for a change, and a Transformative Idea provided a vision for a changed and improved way, improved performance does not become real until solid execution happens in the Practice and Integration phase.

This is similar to the ‘Ability’ element of the ADKAR Model, where Knowledge is transformed into Ability, or competency, such as with knowing, practicing, then mastering a golf swing.

The New Status Quo marks the arrival of a fresh, new, and hopefully better Status Quo. If planning, vision, and the adoption of a truly good Transformative Idea was undertaken, then the New Status Quo should be better than the old. Productivity and Performance should be improved from the Late Status Quo.

It is critical to monitor and control especially during the early New Status Quo phase to ensure that people do not revert back to old familiar ways, or otherwise veer off course. This tendency is captured in the ADKAR Model’s Reinforcement phase, which acknowledges the need to reinforce the knowledge and ability that has been gained through the change.

Strategy and the Satir Model for Change

Strategy is all about seeing ahead – seeing the need to change, and devising the best approach forward.

The Satir Model provides a framework not only for implementing, but for seeing clearly the challenges and barriers ahead. Accepting and incorporating the realities of change into strategic plans only makes sense.

Project/Program/Portfolio Management and the Satir Model for Change

It’s one thing to know the various phases of change – in this case, as depicted by the Satir Model. But how do you actually cope with these phases, as a project manager – and lead your team through them?

The job of the project manager is to lead through change, while maintaining team effectiveness and performance all along the way.

The Good and Bad About the Satir Model

While the Satir Model has merit, here is a realistic sketch of strengths and weaknesses.

Weaknesses – Where does the Saitr Model fall short?

Gaining perspective from a framework like the Satir Change Model is a big help to leaders in rallying the team and addressing blockers at each phase.

Do you have a change leadership experience you can share?

A much more ‘personal’ approach is given in the following video, but it still ties to the same Satir Change Model process in a very natural way: