Nature, industries, and companies go through stages of evolution. Many of these stages are captured in life cycles, natural processes in business development, or the increasingly agile stages of development.

This post examines an interesting framework for stages of industry development, and it was built upon a mountain of empirical data. 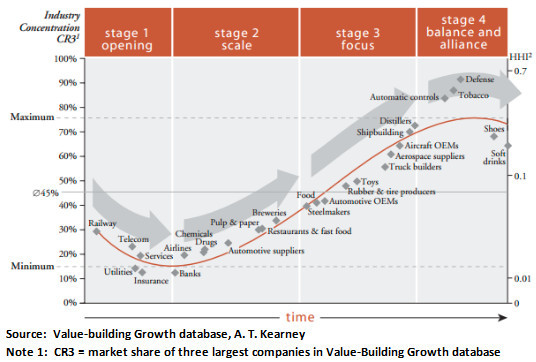 The Consolidation Endgame Curve is a phenomenon identified by A. T. Kearney through extensive analysis of thousands of companies across industries. Through this research, they identified patterns that are common across virtually all industries, as illustrated at right.

The industry consolidation that occurs when an industry advances from left to right along the curve is measured by the market share of the three (3) largest competitors in the industry.

The curve notably shows various industries at different points along the curve – and thus at varying industry development stages.

Let’s start with this generalized Consolidation Endgame Curve, and then take a look at the characteristics of each of the four stages:

Making it through the stages is primarily a game of speed; the fastest wins. While navigating through the stages, companies need to determine if they are in a position to be a leader and survivor, or if the wiser course is to be acquired, or even opt out.

Variations in Consolidation: A Bumpy Ride

The above basic consolidation endgame model is basic…but in practice occurs in less predictable ways. The following diagram is from “The Merger Endgame Revisited” by A.T. Kearney, where they reassessed their original theories and framework based on increased experience and growth of their database. 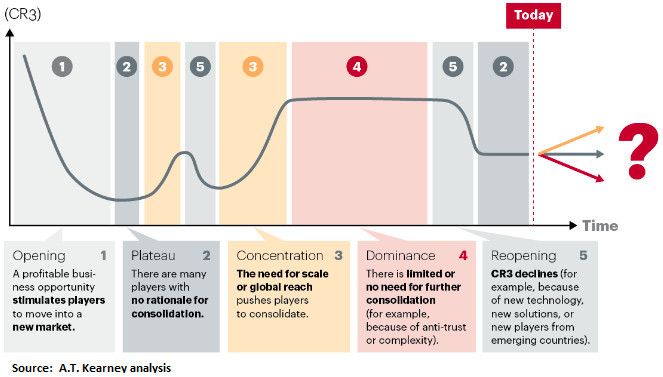 While they are proposing some modifications to the original four stages, I think the important thing to note is that it is not a smooth ride through the stages, and for some good reasons:

The idea is that, once the industry reaches a stage, events (i.e. such as those listed above) can and do happen that push the industry back to a prior stage. This is sometimes even a bump back to the beginning – a ‘Reopening’.

I think this is a more realistic view. An industry does not develop in a serial process and then simply coast along and eventually disappear. Industries sometimes disappear, but more often they retrench and restructure themselves into a new order in the face of change. Therefore, it makes sense to consider shifting among phases, and often even starting anew, but with an existing order in place.

One key strategic variable to consider is known as ‘share of fixed costs’. That means that, of all business costs or expenses, what portion is fixed, and what is variable. When fixed costs make up a high proportion of costs, there is a greater opportunity for economies of scale.

Another factor is the degree to which information content adds value to the product. The Internet of Things (IoT) evolution has resulted in the transformation of physical-only products into similar products but with a high information content. This can totally change the share of fixed costs, as the information portion is often primarily a fixed cost, with a minimum variable cost. However, with digital technology evolving so fast, the life cycle of that IoT product is short.

Yet another factor is the growth of network effects. This can result in completely different manifestations of scale economies. An example is the effect of building or joining a network-based ecosystem to create competitive advantage.

All of these things can result in transitioning of industries among consolidation, stagnation, and deconsolidation. This leads to four broad options for courses of action, illustrated at right.

Project managers are charged with implementing. In all cases, the consolidation endgame requires strong execution.

Here are some key areas of concern for PMs when thinking about the consolidation endgame framework:

The key things from a project perspective to think about include:

All of these considerations relate in some way to risk.

Success in the consolidation endgame realm is highly dependent on clear liking of strategy to projects and solid project execution.

Pros and Cons of Using the Consolidation Endgame Curve

The work of A.T. Kearney in identifying and developing the analysis and theory around the consolidation endgame is based in exhaustive and thorough research. It undoubtedly is helpful to understand these effects and implications for the strategies that your company chooses.

However, I think it may be less applicable to more fragmented industries, where there are large numbers of established and stable competitors. The emphasis on scale applies more to larger, more consolidated – or consolidating – industries.

Nonetheless, fragmented industries, or even parts of them, can and do change and can consolidate. It is well worth understanding the effects of the consolidation endgame curve.