Among many models of the change process, none embrace the process of Transition like the William Bridges Transition Model.

This post explores the nuances of the Bridges Transition Model, dives into the uniqueness of each piece, and identifies at how strategists and project managers can leverage it.

What Is the William Bridges Transitions Model? 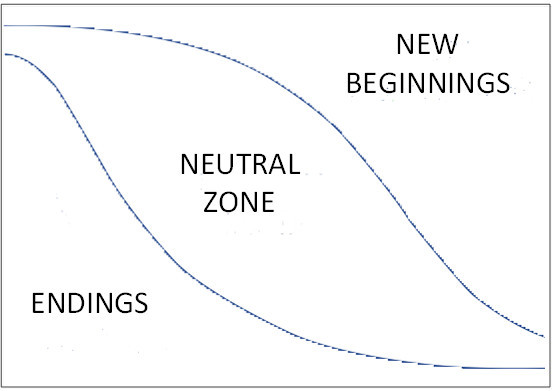 One of the key tenets of the Bridges Model is the distinction between Change and Transition:

The Bridges transition flows through three phases, or zones:

Let’s take a deeper dive into each of the three phases, or zones, of the Bridges Transition Model. 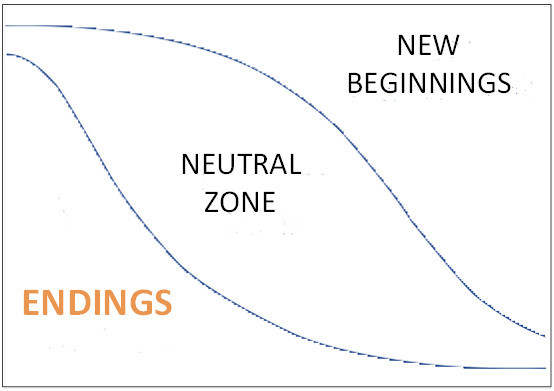 People experience two sides of change as they let go of the past:

For most people, Endings are hard. The graphic indicates that the Endings process is quick or nonexistent for a small fraction of people, who skip Endings and move immediately into the Neutral Zone or New Beginnings.

Zone 2:  Transitions and the Neutral Zone 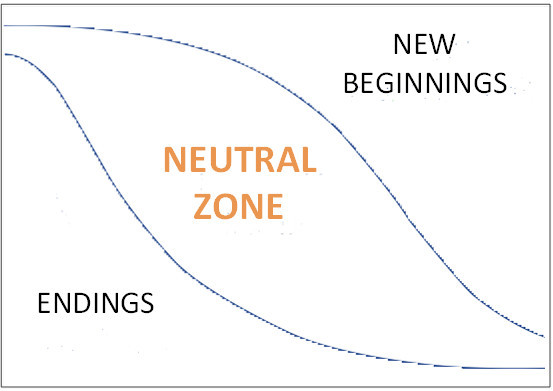 When people transition to the Neutral Zone, they have accepted that the change has happened, and that they have to move on. However, they still are largely moving into the unknown.

As people enter the unknown, their productivity will naturally decline. The majority of their attention will be on coping with the transition.

The Neutral Zone can be a time of confusion and uncertainty for people. They can alternately look back at the certainty of the past as well as the potential certainty of a future with New Beginnings.

The graphic shows, in the upper region, how the pattern of people in the Neutral Zone initially follows a long flat transition before they enter the New Beginnings stage. Most people take some time as they oscillate between looking backward and looking forward, until they finally get a hold of the latter and gain momentum moving forward.

Note that a small fraction of people will never make it through the Neutral Zone. 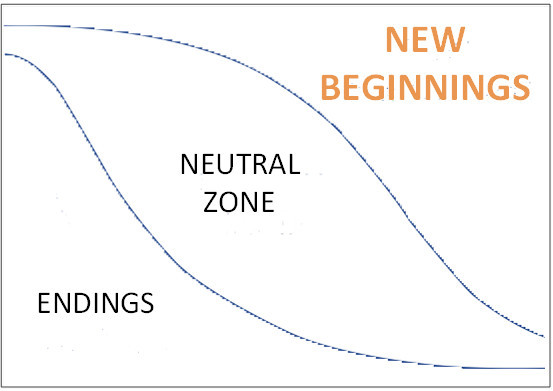 By the time people enter the New Beginnings zone, they are largely embracing the change. In fact, they have bought into it and are willing and eager participants.

People who have gotten this far have a new sense of control. They have confidence from having made it through the transition to this point.

They also have a sense of history – something that anyone new does not possess. There probably is some cultural value to this and can be passed on to newcomers.

Note that with New Beginnings, which starts at the upper left of the graphic, some people charged right in, skipping Endings and the Neutral Zone. However, the vast majority of people do not.

It takes time for most people in the organization to fully take ownership of the new way of doing things. Those who have transitioned early need to be aware that things will keep improving as more and more people transition into and through the New Beginnings phase.

Strategy and the Bridges Transitions Model

Strategy without implementation is not worth much! The Bridges Transition Model helps with that distinct aspect of how people react to a change.

Transition, by contrast, is internal and brings people through the process. The key to implementing change in any organization is to bring people along in the process.

The Bridges Transition Model provides a more internal lens, allowing the strategist to see strategic change from a human point of view. This allows executives and strategists to adjust their expectations to add time for personal assimilation of changes into plans.

Most leaders focus on change and not transition – to their peril. Changes will be successful if people are brought along through the change.

One of the key insights for project managers provided by the Bridges Model is the distinction between Change and Transition. Projects are often part of, or the results of, the external Change, and the implementation of the project needs to ensure that people are being helped through the Transition.

The additional unique insight is in how Bridges’ Transition Model maps to the Kurt Lewin Change Management Model, and even further to the John Kotter Change Model. This can be very helpful, as there are certain unique strengths to each. Project managers can use them to create an effective hybrid approach to change management.

Here is what each uniquely brings to the table:

Project managers can plan a tailored approach that takes elements from each of these powerful models and combines them into an effective change implementation plan for the project.

Strengths and Weaknesses of the Bridges Transition Model The following are some strengths and weaknesses to consider regarding the Bridges Transition Model:

Change is inevitable; it happens of its own volition, must happen in order to move forward, and you will hold yourself back if you do not accept it. The William Bridges Transitions Model provides a helpful framework for project managers and strategists to lead change.

What experience do you have applying the Bridges or any other change management models?