PESTLE Analysis – also referenced as PESTEL, PEST, and a number of other variants – is a framework or evaluating macro context factors as part of strategy development. PESTLE is an acronym for Political, Economic, Social, Technological, Legal, and Environmental. The PESTLE analysis framework is becoming increasingly popular and relevant with the rise of environmental concerns, the blurring of international borders, increasingly active monetary policy, and many more developments.

There following are short descriptions of each of the PESTLE components, and some primary factors you might want to consider. Note that the components are not entirely discrete as there is some natural overlap among them.

Political factors relate to the role a government plays in the economy or particular industry. It could be government at any level: local state, provincial, territorial, or national. Some primary political factors you might consider include: stability, tax policies, regulation, human rights, elections, spending, and trade.

Technology factors include innovations in technology that may affect advances in efficiency in all facets of the workplace, workforce preparedness, marketing and sales, and general ease of communications within the society. Some primary technology factors you might consider include: automation, research and development, access to new technology, supporting educational resources, web infrastructure, and technology awareness.

Legal factors include specific laws related to how citizens can interact, the rights citizens have with businesses and the government, how local government relates to national government, and how the legal system is structured. Some primary technology factors you might consider include: discrimination, antitrust, employment laws, consumer protection, copyrights/patents, education, data protection, and health and safety.

PESTLE Analysis and Other Strategy Frameworks

As such, PESTLE analysis is often performed in conjunction with other popular frameworks that focus more on the internal and external factors at work, such as:

The thing to recognize about PESTLE analysis is that it does not stand alone as a strategic framework, but rather is complementary to other frameworks. 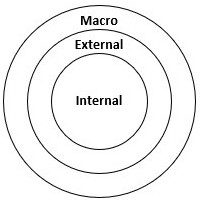 For an example, I am going to look at the case of a drone service company that is initiating an experimental project to look at the viability of a food delivery service from local restaurants. Below are the highlighted factors in the sample group of primary PESTLE factors to consider. 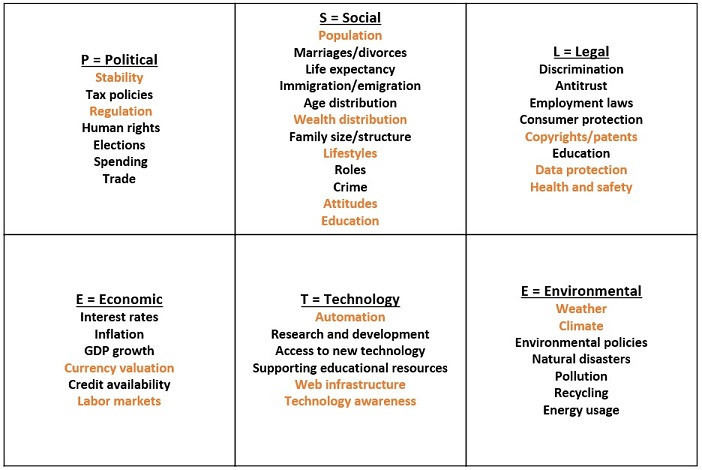 Here are the details on the relevant factors:

As noted previously, there are numerous overlaps among the PESTLE components and factors, but the overall process is revealing inters of the macro factors that could affect the venture, and what risks need to be managed or accepted. The factors above are the priority factors of interest where more in depth review is warranted.

Your projects consistent of many contextual factors which are important to consider. Many of them will translate to risks. Performing a PESTLE analysis in project management is a good idea, as it helps you to identify those factors that will preset macro level risks.

If there is a PESTLE analysis or something similar at the organizational level, that makes it easy. You can simply borrow from it and highlight the factors that are significant within the project context. Once you have identified them, you can consider which you should move to the risk register for further consideration.

Using PESTLE analysis in project management does not ensure strategic alignment. However, it does help to identify which macro environment issues might affect the project, and enables you to build a risk management plan around those issues.

PESTLE analysis is a relatively basic concept, but can be a lot of research work. It is most important to identify the primary PESTLE factors that require further research and analysis. Dig as deep as you need to answer the questions relevant your situation. Particularly when using PESTLE analysis in project management, it is important to lean on analysis already done within your organization, and to consider only those factors that are clearly relevant to your project. If you do that, you will be in a good position to manage or accept any macro risks to the project.